Our intrepid reporter (and Tesco.com Mobile Product Manager) Rebecca Pate concludes her visit to Mobile World Congress in Barcelona with this despatch, ending with a message for Android users: 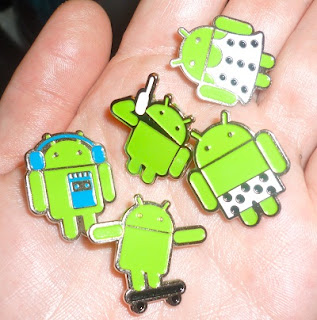 The second day spent at MWC started with the developer event with HP introducing webOS, there’s some really cool UI stuff going on here, like ‘Just type’ and coupling of browser screens. After a stop-off at the Blackberry stand to experiment with the Playbook and the HTC stand to check out the new HTC Flyer; the Android ‘park’ was next on the list. It couldn’t have got more exciting with Doughnut, Gingerbread and Honeycomb smoothies coupled with a giant Android slide, yes you heard me and there is photographic evidence to prove it.

The number of tablet devices here at MWC is striking, almost every stand has got one on (it’s hard to differentiate between all of them too!). What’s interesting is that HTML5 is the common factor to all of them, indicating that this is the future platform for apps, both web and mobile. It opens an interesting debate here at Tesco for what we deliver to our customers and their expectations over the coming months.

The third and last morning was spent roaming around the conference hunting for variations of the collectable Android pins of which there are 86 in total, they were located (or sometimes hidden) at the stands of companies that are using Android in some form. It was serious business mind, with the more “duller” kind being traded and swamped for those more unique in the collection; I managed a grand total of 20 which wasn’t too bad for a couple of hours work…

I arrived at the airport still seeing mini Androids (see photo above) so I think their clever marketing paid off.


As for our Android customers reading, we have something just around the corner for you!

© 2016 All Rights Reserved | Powered by Wordpress | Made with ❤ by Themely